Timișoara is the capital city of Timiş County, the 3rd largest city in Romania and the main social, economic and cultural centre in western Romania.

Nicknamed the Little Vienna or the City of Flowers, Timişoara is considered the informal capital city of the historical Banat. The country’s third most populous city is the economic hub of the region, with 319,279 inhabitants as of the 2011 census, home to almost a half-million inhabitants in the metropolitan area, as well as ca. 50,000 students from over 50 countries.

Timişoara municipality, documentarily attested of over 730 years, the capital of Timis County, located in Câmpia Timişului (Timis Plain); Timis Plain is crossed by Bega and Timiş Rivers, whose presence has influenced over the time the evolution of the town from the Citadel fortified with walls, bastions, fosses and vallums. Known as Citadel (ever since 1212) - Castrum Temesiense - located at the crossroad of the military and trade roads, becoming a main target of the dispute between the Turks and the Austrians and later on, coveted by the Hungarian bourgeoisie and aristocracy -  Timişoara developed as a town around the fortified nucleus starting from the 18th century. In the period 1315-1323, King Charles Robert of Anjou establishes his royal residence at Timişoara citadel.

In 1781, Timişoara was granted privileges and was declared a free town, the credential document containing the acknowledgement of the coat of arms and of the seal. The coat of arms is divided by a horizontal line into two parts, the upper one being divided in its turn, by a vertical line. The upper left half comprises four silvery bands within a bloody plain, symbolizing the four main rivers which cross Hungary. In the right half, on a golden background, it is presented, on a green base, the former water tower of Timişoara citadel, and through its open gate, one can see a mill wheel.

It was the first city in the Habsburg Monarchy with street lighting (1760) and first European city to be lit by electric street lamps in 1884. It opened the first public lending library with reading room in the Habsburg Empire and built a municipal hospital 24 years before Vienna. Also, it published the first German newspaper in Southeast Europe (Temeswarer Nachrichten). It has been an important centre for music in Europe since the 19th century.

It is a representative place for Timişoara and surely every tourist who visits the city also reaches the Unirii Square. The oldest market in the city, in Baroque style, houses the Roman Catholic Cathedral or Episcopal Cathedral, the Baroque Palace, the Serbian Orthodox Bishopric, the Serbian Orthodox Episcopal Cathedral, the N. Lenau Theoretical High School, the Monument of the Holy Trinity, mineral water fountain and other buldings from 18th - 19th century. Next to the pharmacy near the Baroque Palace, among the tiles that form the pavement of the market you can see on a stone with the plan of the former Citadel of Timişoara from the 19th century. 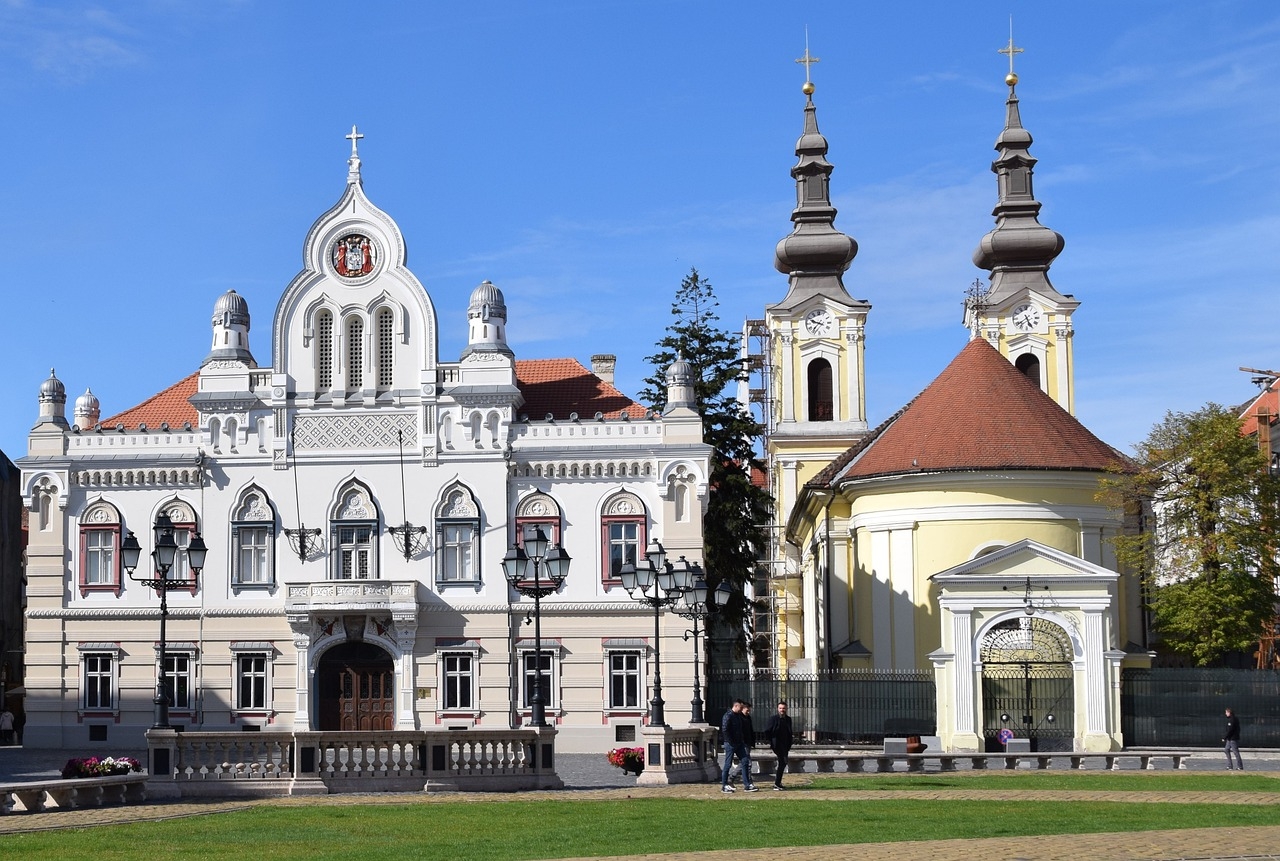 It dates from the 18th century. Over time it was the official residence of the Timiş County (in the 18th and 9th centuries), the seat of the governor of Banat Timişan and Vojvodina (1849-1860), the headquarters of the Prefecture (20th century), and since 1984 it houses the Art Museum.

The monument of the Holy Trinity

It is located in the center of the Union Square. It was made from sandstone in 1740 in memory of the victims of the plague of plague from 1738-1739, at the request of De Jean, a nobleman of French origin (participating in the siege of Timişoara under the leadership of Prince Eugene de Savoya, then councilor of Governor Mercy). The style is baroque, the pedestal is enriched with statues of saints at the bottom, and the bas-reliefs represent scenes from the plague epidemic.

It is one of the symbol buildings of the city. It was built between 1936-1946. His style harmoniously combines elements of Byzantine architecture and old Moldovan Romanian architecture. It has 11 towers and a height of 83 m. The plan is in the form of a cross, the towers are covered with colored glazed tile, forming typical Romanian decorative motifs. The large dome is in the Moldavian style, the side vaults are in the Byzantine style, and the floor is made of mosaic stylized according to the model of the Banat carpets. The 7 bells weigh 8 tons, each corresponds to a musical tone and has an inscription from the holy texts. They were cast from a rare material, brought from the islands of Sumatra and Borneo and given by the composer Sabin Dragos. The harmony of the electrically operated bells is a very special one. The cathedral was consecrated in 1946 in the presence of its founder, King Michael I of Romania. 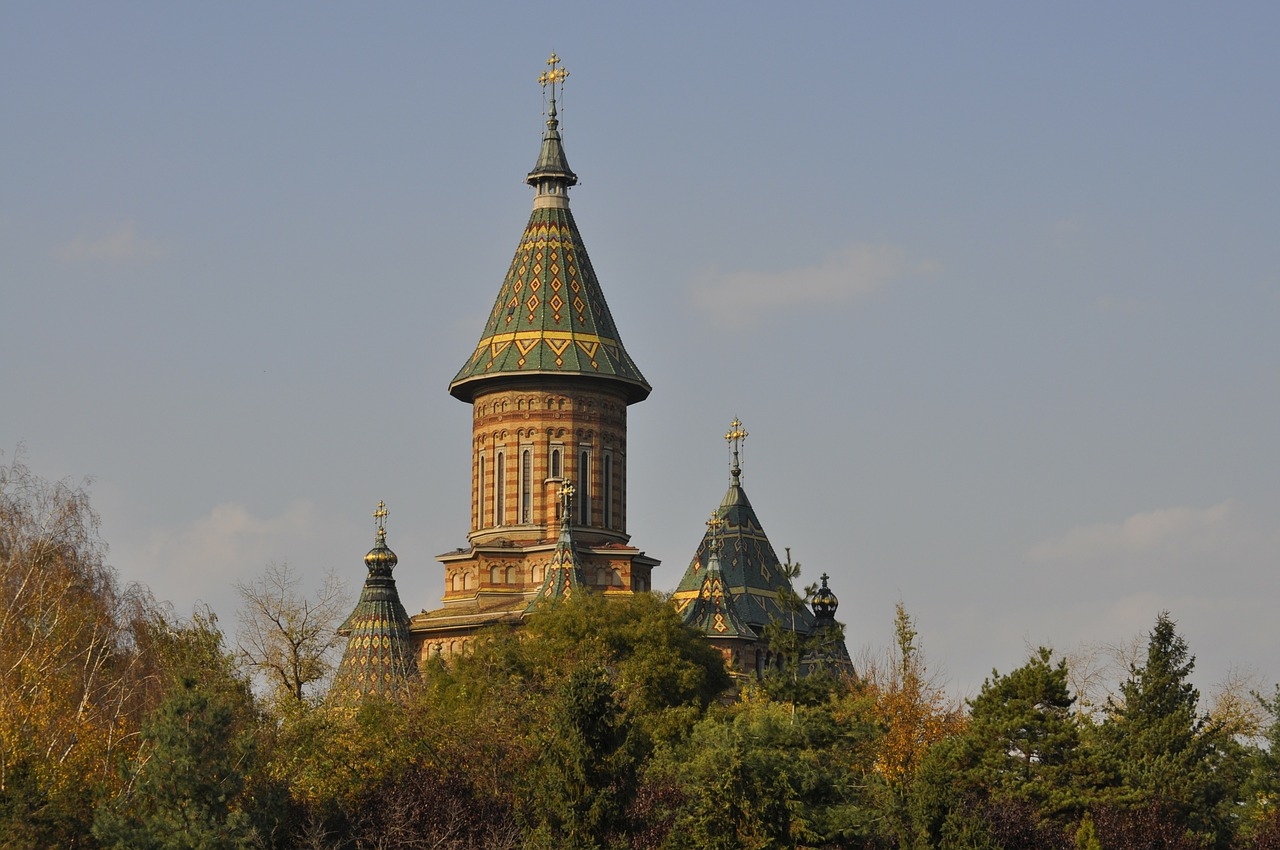 It is located in the Unirii Square, near the Serbian Episcopal Cathedral. It was built between the years 1745 - 1747 in Baroque style, and the facade was transformed with elements of Serbian architecture between 1905-1906.

The Dome or the Roman-Catholic Cathedral was designed by Josef Emanuel Fischer von Erlach and built between 1736-1754. The church is the most valuable work of baroque architecture in Timişoara. The main altar, semicircular, made of marble, is dedicated to the Holy Trinity and is based on golden statues of saints and angels. The interior altars are in the Gothic style, and the baroque decorations with rococo elements are created by renowned artists from Vienna in the 19th century. The watches and the organ are manufactured in Timişoara workshops.

One of the oldest markets in the city. Here is the Old Town Hall, the monument of St. John Nepomuk, the Palace of the Count of Soro (or the House of the Military Commander), in front of which is the bust of Decebal, King of the Dacians, with the inscription "Decebalus per Scorilo". It was built between 1731- 1734, according to the plans of the Italian architect Pietro del Bronzo. It was modified 1782, remade in 1850 after the bombings of 1849 and renovated in 1935. The style of the facades combines elements of Baroque and Renaissance ornamentation.

Great Synagogue (Synagogue in the Fortress)

It was built between 1863-1865, in Moorish style, following the architect Ignatz Schumann's project. The plan of the church is in the form of a Greek cross, the dome is hemispherical and the outside has few glazed ceramic decorations. It is currently being renovated.

Between 1723 and 1765, the largest Vauban-style fortress in our country was built in Timişoara. It had 9 strongholds and had an important defense role in the 18th - 19th centuries. However, at the beginning of the 20th century the fortress prevented the development of the city and it was decided to demolish it. The part of the fortification that still exists from the former fortress of Timişoara is known under the name of "Bastion" or "Theresia Bastion".

In the past, the building hosted the Higher Trade School. It was built in 1924-1925 in a neo-romanian style.

It was built between 1307 - 1315 by Italian masters to serve as the residence of King Carol Robert de Anjou. The name of the castle comes from the name of Ioan Huniade, who ruled between 1441-1456 as Count of Timiş. In 1443 he ordered the reconstruction of this building severely damaged by an earthquake that year. In 1849, the building was destroyed to the ground and had to be completely restored, its current form dating from 1856. Since 1946 it houses the Banat Museum.

Also called Opera Square or Revolution Square, located in the center of Timişoara, Victoriei Square is one of the symbolic places of the city. It is bordered by imposing buildings, representative of the secession architecture of Timişoara at the beginning of the 20th century. The 1989 revolution is still alive in memory of Timisoara, who gathered in Victoria Square to overthrow the communist regime.